What is an Air-Operated Double-Diaphragm pump?

An Air-Operated Double-Diaphragm pump (AODD) is a type of positive displacement (PD) pump. It consists of two pumping chambers that are alternately filled and discharged by the movement of flexible diaphragms. Compressed air is alternately fed to, and vented from, air chambers on the opposite sides of the diaphragms to create the pumping action.

AODD pumps are generally used for transfer applications and can handle a wide variety of feeds including sludges, slurries, abrasive and shear sensitive fluids. Although they are robust, reliable and easy to maintain they can be noisy, prone to icing, and are limited to low pressure applications.

How does an AODD pump work?

An AODD pump moves fluid by the alternate and repeated back-and-forth movement (strokes) of two flexible membranes or diaphragms mounted on a common shaft (Figure 1). Although diaphragm pumps can be driven directly, with the shaft connected directly to a motor, an AODD pump uses compressed air with a sophisticated distribution system directing the air alternately to two air chambers on the opposite sides of the diaphragms. Figure 1 shows a complete cycle of an AODD pump: 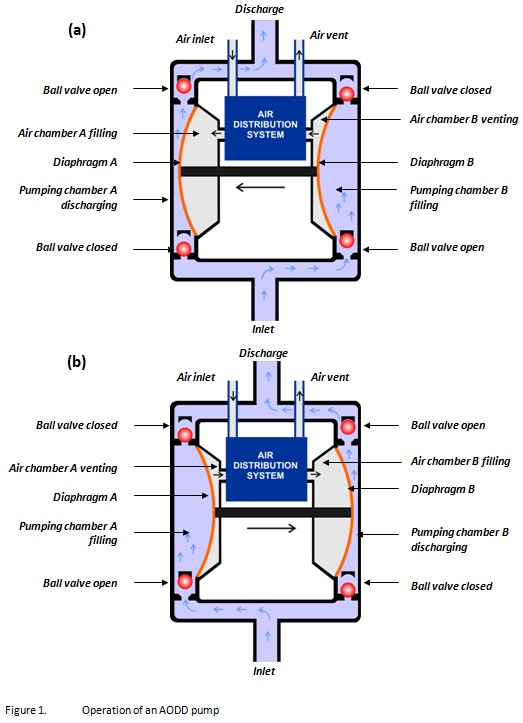 What are the main features and benefits of an AODD pump?

AODD pumps are essentially leak-free. There are only stationary seals between the wetted parts and the outside environment so leakage can only occur if one or both diaphragms fail. As part of a general maintenance programme, diaphragms should be replaced regularly, according to the manufacturer’s recommendations. Diaphragms suffer less wear in an AODD pump than those in a mechanically driven diaphragm pump because of the benefit of pressure balancing by the compressed air supply.

AODD pumps are capable of handling abrasive, highly viscous fluids, sludges or slurries. In addition, the gentle pumping action makes them ideal for shear-sensitive fluids. The four internal check valves generally use either a ball (or cone)/seat or flap design. Ball valves provide a better seal and are less prone to wear than flap designs. Since flap-type valves are hinged, long-term use eventually causes fatigue at the flexing point. Ball valves wear more evenly since the ball is free to rotate during operation and settle in a different position on the seat. Flap-type check valves have the advantage that they can more easily pass large solids entrained within the pumped fluid.

With no internal seals or moving components requiring lubrication and cooling, an AODD pump can be run dry indefinitely without damage. AODD pumps are self-priming and some are capable of a suction lift of up to 8m.

AODD pumps are suitable for use in hazardous areas because of the use of compressed air as the power source rather than electricity. For the same reason, an AODD pump can be safely submerged - as long as the air vent is above the liquid level.

What are the limitations of an AODD pump?

The air distribution system provides the power and control for an AODD pump. The hardware is relatively cheap, simple and easy to maintain. However, in some plant environments, it may be necessary to filter expelled air to capture contaminants such as oil.

Icing can be a problem with poorly designed air distribution systems. The constant venting of air causes cooling and, in extreme cases, this can result in the build-up of ice around the air vent or within the distribution system. This problem can be minimized by avoiding constrictions, reducing the humidity of the compressed air supply, installing a heater or by reducing the pressure of the compressed air supply.

The cyclic action of a diaphragm creates pulses in the discharge with the fluid accelerating during the compression phase and slowing during the suction phase. Pulsing in an AODD pump is reduced by the use of two cylinders with one in its compression phase whilst the other is in suction. However, some form of damping or smoothing is often employed downstream. Pulsing can cause damaging vibrations in the discharge system and a flexible connection at the pump outlet reduces the likelihood of loosened connections and leakage.

AODD pumps can also be noisy, not only because of vibrations resulting from the pulsing action but also because of the constant venting of the air valves. Air noise can be reduced by fitting a muffler on the air vent line.

What are the main applications for AODD pumps?

Motor-driven diaphragm pumps are often used for metering, dosing or dispensing applications but AODD pumps tend to be general workhorse devices, typically used in transfer applications. They are relatively low cost and reliable; they can be run dry and can pump dirty/contaminated liquids.

The following table lists some typical applications of AODD pumps:

An AODD pump operates by the alternate and repeated back-and-forth movement of two flexible diaphragms mounted on a common shaft (Figure 1). Operation is dependent on the ready availability of a clean compressed air supply and is restricted to pumping fluids at pressures at or below that of the available air supply. AODD pumps are capable of handling abrasive, highly viscous fluids, sludges, slurries, and shear-sensitive fluids.

The action of an AODD pump creates pulses in the discharge and this must be taken into account with any downstream plant design. Vibrations arising from the pulsing discharge can also be a source of noise, as can the constant venting of compressed air by the distribution system. There can also be problems with the build-up of ice around the air vent or within the air distribution system.

Despite these potential problems, AODD pumps are robust, reliable, easy to maintain, and relatively low cost. They tend to be general workhorse devices and are typically used for transfer applications in a wide variety of industries.