What is a diaphragm pump?

What are the advantages of diaphragm pumps?

Diaphragm pumps are essentially leak-free. There are no seals between the wetted parts and the outside environment so leakage can only occur if a diaphragm fails. With no internal seals or moving components requiring lubrication and cooling, a diaphragm pump can be run dry indefinitely without damage. They are also self-priming. The gentle and reproducible pumping action makes diaphragm pumps ideal for handling shear-sensitive fluids and for dosing systems.

What are the disadvantages of diaphragm pumps?

What are the limitations of check valves?

The check valves in diaphragm pumps generally use either a ball (or cone)/seat or flap design. Ball valves provide a better seal and are less prone to wear than flap designs. Since flap-type valves are hinged, long-term use eventually causes fatigue at the flexing point. Ball valves wear more evenly since the ball is free to rotate during operation and settle in a different position on the seat. Flap-type check valves have the advantage that they can more easily pass large solids entrained within the pumped fluid. Check valves may become blocked or wear unevenly resulting in bypassing or a loss in efficiency.

How can pulsation be reduced?

One way of reducing pulsation problems is to use two or more diaphragms operating in sequence. For example, a double diaphragm pump has one diaphragm in its compression/discharge phase whilst the other is in suction. The most common example of this type of pump is the air-operated double diaphragm pump (AODD). In an AODD, air is alternately fed to, and vented from, air chambers on the opposite sides of two diaphragms (Figure 2).

What are the limitations of air operation?

Icing can also be a problem with poorly designed air distribution systems. The constant venting of air causes cooling and, in extreme cases, this can result in the build-up of ice around the air vent or within the distribution system. This problem can be minimized by avoiding constrictions, reducing the humidity of the compressed air supply, installing a heater or by reducing the air pressure.

Air-operated diaphragm pumps can also be noisy because of the venting of the air valves and pulsing flow. Air noise can be reduced by fitting a muffler on the air vent line. 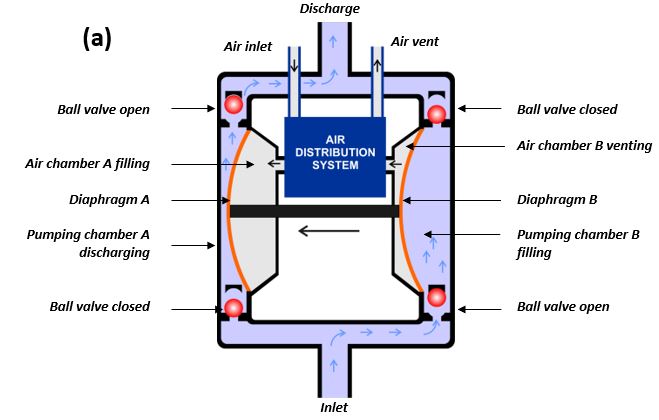 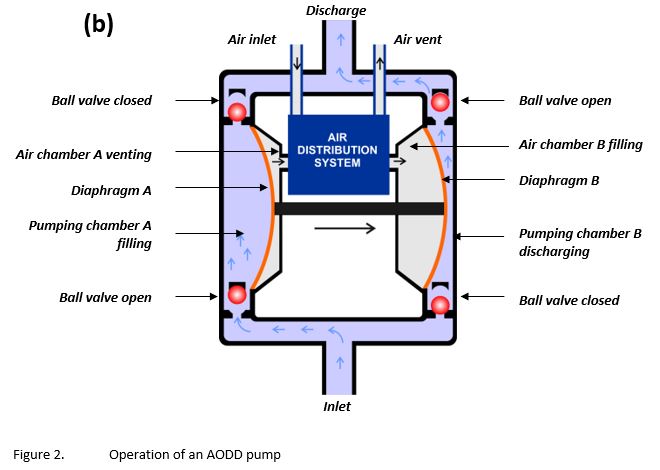 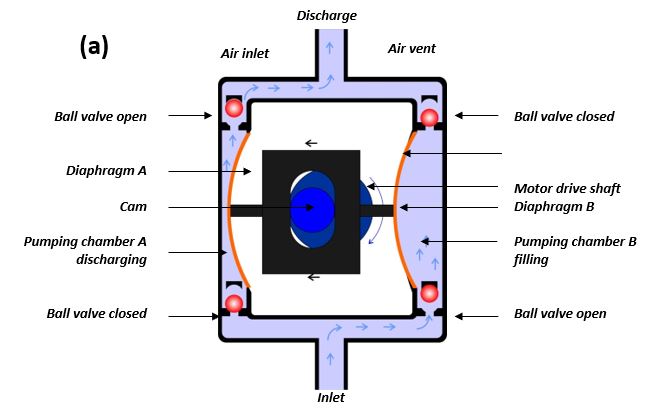 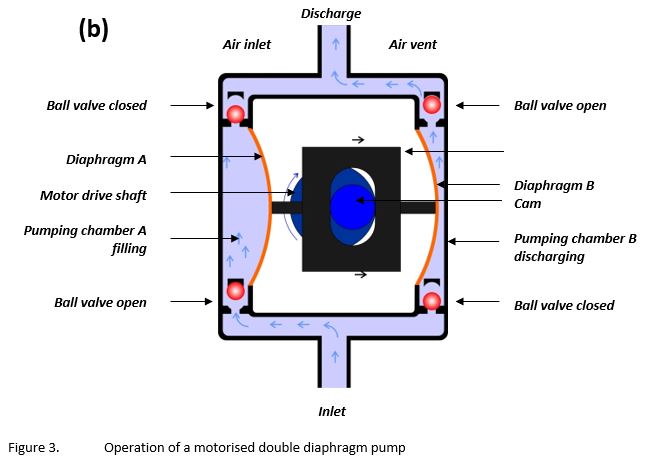 What are the alternatives to air operation?

An alternative approach to air actuation is to use a motor, converting the rotational motion of an electric motor into the lateral, reciprocating, back and forth motion required to drive the diaphragms. One way to achieve this is by using an eccentric cam on the motor’s drive shaft to move the two diaphragms in much the same way as an air distribution system (Figure 3).

Using a motor to drive the pump eliminates the pressure limitations of air feed actuation. However, with a direct motor connection, diaphragms may be more prone to wear: operation by compressed air offers the benefit of pressure balancing. This problem can be avoided by introducing a hydraulic element between the cam and diaphragm.

How can multiple diaphragms be driven by a motor?

The problems of pulsation can be reduced further by increasing the number of diaphragms but this requires innovative methods to achieve precise, cyclic operation. There are two main ways to convert the rotational motion of an electric motor into the lateral, reciprocating, back and forth motion required to drive multiple diaphragms.

One approach is to use multiple cams or crankshafts on a motor mounted at right angles to the diaphragms. The cam shafts are generally eccentric lobes mounted on the drive shaft. As the shaft turns, the cams reciprocate pistons through connecting rods which in turn cycle the pressure in hydraulic cells at the back of the diaphragms. This creates the pumping action. The hydraulic cells pressure balance the diaphragms with respect to the pumped fluid. Pumps of this type may contain three equally spaced diaphragms operating in sequence to provide a consistent, low pulse flow. 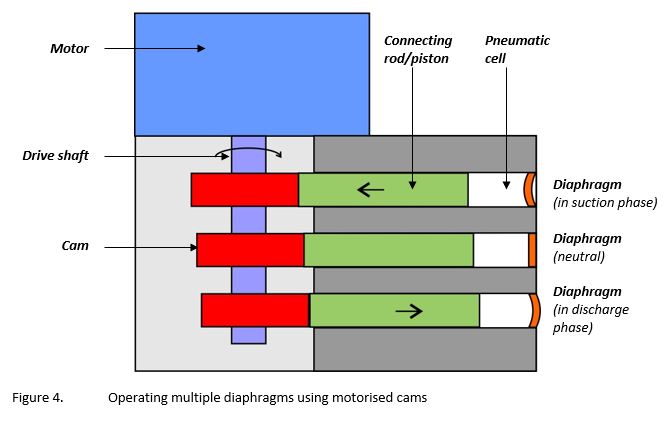 Another method uses a fixed angle cam (also called a swash plate or wobble plate). This is an angled plate connected to the motor shaft. A fixed cylinder block, containing multiple pistons, is held against the angled cam. As the motor rotates, the pistons follow the angle of the plate, reciprocating in turn. Each piston, in line with a hydraulic cell, causes a diaphragm to flex and create a pumping action. On the diaphragm’s suction stroke, fluid is drawn in from a common inlet through an inlet check valve. On the forward stroke, the fluid passes through a discharge check valve and out through a common outlet. Pumps of this type can operate up to five equally spaced diaphragms, each with its own pumping chamber, and provide consistent flow with low pulsation.

A diaphragm pump consists of one or more pumping chambers alternately filled and discharged by the movement of flexible diaphragms and check valves on the inlet and outlet. They are essentially leak-free with no seals between the wetted parts and the outside environment. The two phases of the pumping action, suction and compression/discharge, lead to pulses in the discharge. This effect can be reduced by using two or more diaphragms in sequence. The air-operated double diaphragm pump is the most common pump of this type however operation is limited by the pressure of the air supply. Air operation can also cause further problems such as icing. Motorised versions, in which the sequential operation is achieved using a cam allow double diaphragm pumps to be used at higher pressures. Pulsation can be further reduced in motorised versions using three or more diaphragms and innovative use of eccentric cams, pistons and pneumatic cells.