Useful information on Side Channel Pumps

What is a Side Channel Pump?

A side channel pump consists of one or more impeller assemblies (stages). The impellers are similar to those used in centrifugal pumps but the close tolerances between the casing and impellers has more in common with positive displacement pump designs. The pumping action arises from the complex transfer of energy as the fluid repeatedly interacts with the rotating impeller vanes and passes around a groove – the side channel – in a facing plate.

Side channel pumps are commonly used in the chemical industry because of their ability to self-prime and to handle liquid/vapour mixtures. Side channel pumps also have further benefits in terms of efficiency in applications which require low throughputs at high differential heads.

How does a Side Channel Pump work?

There are two aspects to the operation of a side channel pump. Under normal conditions, when the pump is filled with liquid, it performs in a similar manner to a centrifugal pump. When starting up, with a partially filled pump and empty suction line, a side channel pump operates like a positive displacement pump generating suction lift and expelling vapour or air. This priming action is described in the next section.

A side channel pump consists of one or more (up to 8) stages. The key components of each stage are the suction disk, impeller, and discharge disk. The suction disk has a port to admit liquid and has a role in supporting and aligning the impeller. Impellers are star-shaped with multiple, straight vanes. The discharge stage has a circular trough cut into the inside face - this is the ‘side channel’. It extends most of the way around the discharge disk and is tapered towards the discharge port, with a reducing cross-section. The discharge port allows liquid to pass out of the stage – either to the suction disk of a successive stage or to the pump’s discharge flange. 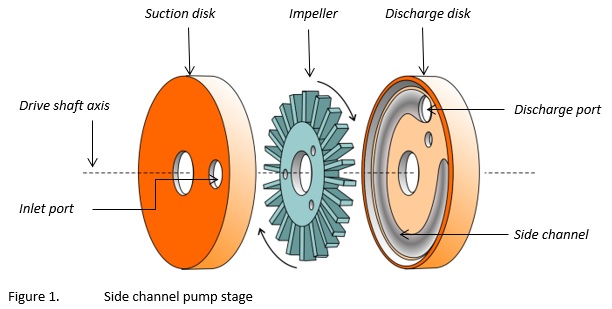 When liquid enters the unit through the suction disk, it encounters the rotating vanes of the impeller. There is a strong transfer of energy and centrifugal force conveys the liquid in a complex helical flow around the vanes of the impeller and the side channel. The frequent exchange of impulses with the vanes imparts more energy to the fluid than occurs in conventional centrifugal impellers.

In addition to one or more side channel stages, pumps of this type often have a conventional centrifugal impeller on the suction side. This enables them to operate under a wider range of NPSH conditions.

How does a Side Channel Pump self-prime?

On startup, the impeller separates air from the retained liquid through centrifugal forces. Liquid forms a cylindrical ring on the inside of the pump casing whereas air collects around the central axis. The liquid ring effectively forms a gas-tight seal, stopping air returning from the discharge line to the suction line. Air is expelled through separate outlets in the body of the impeller because of the pressure gradient. Gradually, liquid rises up the suction line as the air is evacuated. This process continues until liquid replaces all the air in the suction piping and the pump. At this stage, the normal pumping mode commences, and liquid is discharged.

When the pump is shut off, the design of the casing (sometimes involving a ‘goose-neck’ on the suction piping) ensures that enough liquid is retained so that the pump can self-prime on the next occasion it is used. If a pump has not been used for a while, it is important to check for losses from the casing due to leaks or evaporation before starting it. Side channel pumps are designed with fine tolerances between the impeller and suction and discharge disks and require some retained fluid to self-prime. The presence of a liquid film maintains impeller alignment and stops any damaging metal-metal contact with the static components of the stage.

What are the main benefits of a Side Channel Pump?

Side channel pumps generate higher pressures than other types of pumps of a comparable size and power. This makes them suitable for applications where liquids need to be pumped across long distances or through small pipework. They are also ideal for working with pressurised liquids such as LPG. For applications requiring the pumping of low volumes of liquids at high differential pressures, side channel pumps are more efficient and economical than comparable centrifugal pumps.

Side channel pumps can self-prime, so they are suitable for applications such as the emptying of fuel tanks. With a vertical pump design, a side channel pump can be mounted directly onto a storage tank, minimising and simplifying the suction-side pipework.

Side Channel pumps are able to pump liquids with up to 50% gas content without any interruption to operation or damage to the impellers and are therefore less vulnerable to cavitation compared to other pump designs.

Side Channel Pumps have low NPSH requirements: the inlet pressure required for efficient operation is less than that of comparable centrifugal pumps. At lower speeds, cavitation is also less likely to occur.

What are the disadvantages of Side Channel Pumps?

Generally, side channel pumps can only be used with ‘clean’ liquids, free from solids. The small clearances (as little as 0.1mm) within the impeller stages make them susceptible to damage from any entrained, abrasive solids. Side channel pumps should not be run dry. Their self-priming ability depends on the pump containing some fluid at startup.

What are the main applications for Side Channel Pumps?

Side Channel pumps are a popular solution for low flow, high head applications involving low viscosity, clean fluids. They are particularly suited to the handling of high temperature fluids such as in boiler feed applications and the transfer of volatile chemicals. They are also able to cope with fluids containing up to 50% gas such as LPG.

Side channel pumps generate higher pressures than other types of pumps of a comparable size and power, can self-prime, are less vulnerable to cavitation and have the ability to pump liquids with up to 50% gas content. Generally, side channel pumps can only be used with ‘clean’ liquids free from solids. The small clearances within an impeller stage mean that side channel pumps are susceptible to damage from abrasive solids.

The ability of side channel pumps to self-prime combined with their low risk of cavitation makes them ideal for safely and efficiently handling liquids near their vapour pressure. Side channel pumps are used extensively in applications where a standard centrifugal pump would fail, for example, refineries, chemical and petrochemical industries, refrigeration and heat engineering, liquid gas plants, power stations, and tank farms with underground storage tanks.