Viscosity is a measure of a fluid’s resistance to flow, a property that affects how it will behave in a pump and in pipework. This can be complex as viscosity can be affected by temperature, pumping speed, pipe dimensions, and, with some fluids, it may also change over time.

The definition of viscosity is based on laminar, non-turbulent, flow.

What is laminar flow?

At low velocities, fluids flow through pipes in a regular manner with no vertical mixing across the wave front. This is termed laminar flow. At high fluid velocities, eddy currents are formed which lead to random mixing throughout the flow cross-section. This is called turbulent flow. The velocity at which the transition between laminar and turbulent flow occurs is related to viscosity.

What is Shear Stress?

Treating a fluid in the laminar flow regime as a series of parallel layers, shear stress is the tangential force required to move one horizontal plane, with respect to its neighbour, at constant velocity.

What is Newton’s Law of Viscosity?

Under laminar flow conditions, for many fluids, the shear stress (tau: τ ) between two layers parallel to the direction of flow, separated by a perpendicular distance, Δy, is proportional to the difference in velocity between the layers (Δv).

The constant of proportionality, µ, is defined as the absolute (dynamic) viscosity. 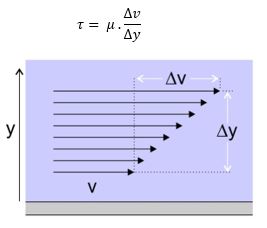 What is Absolute (Dynamic) Viscosity?

Absolute (dynamic) viscosity is a measure of how a fluid resists the deformation of shear stress due to its inter-molecular friction.

What is Kinematic Viscosity?

Kinematic viscosity is the ratio of absolute (dynamic) viscosity (μ) – see the previous sections - to density (ρ) and is a measure of a fluid’s inherent resistance to flow when no external force, except gravity, is acting on it. The symbol for kinematic viscosity is nu: ν and its SI units are m/s2.

Also in common use is the Stoke (St) although this is often quoted as cSt (centiStoke).

Kinematic viscosity is a standard property of a Newtonian fluid whereas absolute (dynamic) viscosity refers to how a fluid (particularly a non-Newtonian fluid) resists flow under an external force (such as a pump).

What is a Newtonian Fluid?

If the viscosity of a liquid remains constant under shear stress such as agitation or pumping at a constant temperature (that is, it obeys Newton’s Law of Viscosity) it is called a Newtonian Fluid. Water and most oils are Newtonian liquids.

What is a non-Newtonian Fluid?

Any liquid that does not obey Newton’s Law of Viscosity is called a non-Newtonian fluid. This includes several different types of fluids that show an apparent increase or decrease in viscosity with shear rate. These changes can also be time dependent or time independent.

What is the Reynolds Number?

The transition from laminar to turbulent flow can be assessed from a calculation of the Reynolds number. This is a dimensionless number determined from the pipe diameter, the flow velocity and the viscosity of the fluid:

The Reynolds Number is effectively the ratio of the forces of mass flow and shear stress due to the fluid’s viscosity. Pipe flow can be considered to be laminar if the Reynolds number is less than 2300 and fully turbulent if it is greater than 4000. Flow characteristics are unpredictable if the value is between these two values.

Pump data supplied by manufacturers generally refers to performance with water and corrections may be necessary if you intend to pump other fluids.

What is a shear-sensitive fluid?

It is important to understand the properties and shear-sensitivity of a fluid when selecting a pump.

What pumps are best for shear-sensitive fluids?

Generally, shear can be minimized by selecting a pump with large clearances, and by running it very slowly. For this reason, several designs of positive displacement pumps are suitable. Internal gear pumps, progressive cavity pumps, lobe pumps and peristaltic pumps are all recommended for dosing shear-sensitive fluids. Centrifugal pumps are not used because of the necessity of high-speed operation.

Viscosity is a measure of a fluid’s resistance to flow.

At low velocities, under conditions of laminar flow, fluids flow in a regular manner with no vertical mixing across the wave front. At a boundary such as a pipe wall, fluid flow is effectively zero. Shear stress arises within the fluid because of the gradient of flow rates from this boundary to the centre of the pipe. Absolute (dynamic) viscosity is a measure of a how a fluid resists the deformation of shear stress due to its inter-molecular friction. Kinematic viscosity is the ratio of absolute (dynamic) viscosity to density.

The viscosities of some common fluids can be found here.